GO TO CO THACH BEACH, IMMERSE YOURSELF IN GREEN MOSS AND FANTASY ROCKS

Co Thach Sea has quite a number of times, but most of the time is quite deserted and quiet. This place only became lively at the time of Nghinh Ong festival or moss season. If you don't find out about Co Thach beach before you arrive, you'll have to regret missing out on one of the breathtaking natural beauty scenes, which is the view of all the rocky beaches covered with green moss. 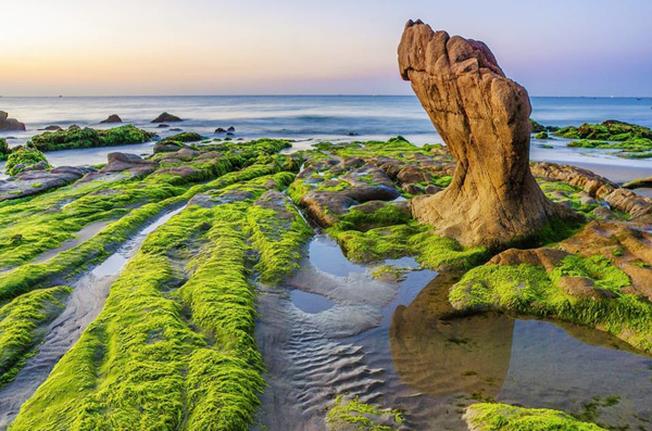 Co Thach beach in beautiful moss season like paradise. Here, although it has been put into operation for a long time, it still retains its inherent wildness.

Beautiful sea mosses are often where there are many rocky rapids and clear water. When the sun rises in the middle of the afternoon, the moss will fall into a beautiful yellow color, making those who are lucky to witness will think they are in the first place. Binh Thuan Sea has many stone floors, it is the place to reach the sea to catch the sunny season earlier than other seas, so the moss here is formed sooner and more beautiful. 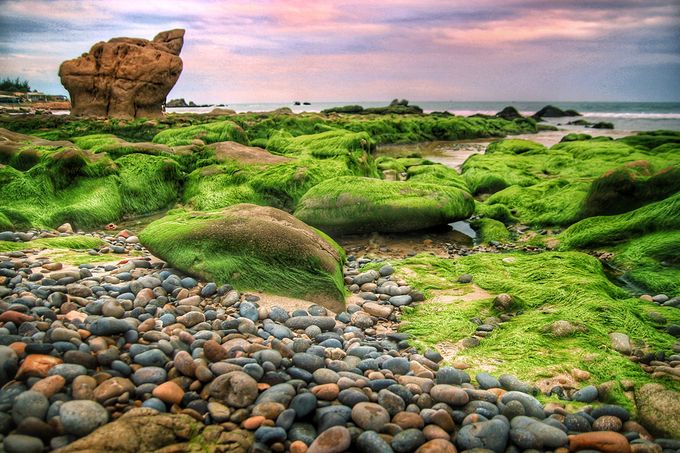 March is the best time to go 'hunting moss'.

The hunting season for most photographers is usually around February and March. Depending on the weather, the moss season may be counted early or a little later. The layers of moss covering the usual rocky beaches can survive for about a month and a maximum of two months.

In order to hunt beautiful pictures of Co Thach moss season, it is quite elaborate because this is related to sea level. If the sea level is too high, it will cover the moss-covered beach. But if the water level is too low, it makes the moss look dry and lose its smooth beauty. The moss will be the best color when the sea is calm in the early morning or at sunset.

Along with the dark green moss coat that put on rocks, seven-color rock yards - a precious natural gift to Co Thach beach is also one of the factors attracting tourists to this pristine beach. 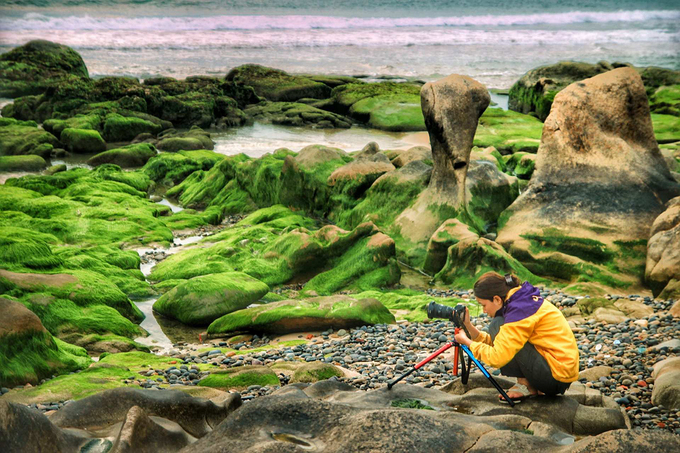 Co Thach color is harmonious between moss and color of rocky beach.

The beach in Co Thach is a rock and sand complex, with rocky beaches consisting of many small, round, flat, colorful stones, called by local people as seven-color stones. This rock formed from nature due to the effects of tide, ocean currents, and seawater.

From the big rocks sinking deep in the sea, sand, rocks, water together and eroding and crushing the rocks. Over hundreds of years, many colorful stone beaches have formed. Stone in seven-colored rocky beach often has many different shapes and sizes, and every day continues to be worn to sparkle and colorful.

Viewed from above, the rocky beach looks like a unique natural picture with thousands of colorful and interesting stones. There are square and sharp members like matchboxes, there are triangular, hexagonal, polygon, rhombus ... with very beautiful lines, with many colors: brown, yellow, purple, green, blue, gray, white. 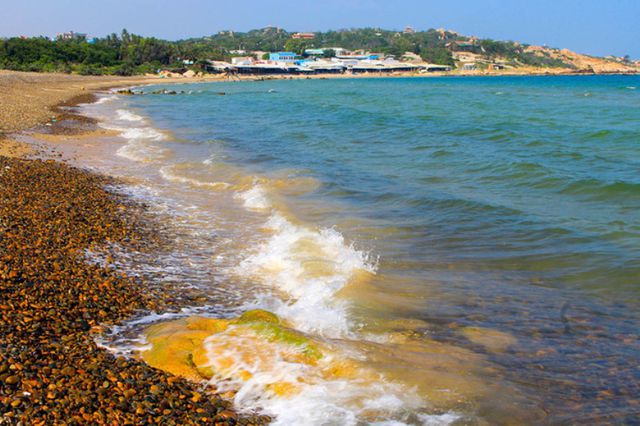 Seven-color rocky beach is nearly 1km long, about 300m wide has a reserve of 244 thousand tons. Each stone is smooth and has beautiful lines.

Under the sun, in addition to the water-based film covered by the waves, the rocks became more sparkling and iridescent. From a distance, they are like the purest jewels. Looking down from above, the rocky beach looks like a unique natural picture, striking with a harmonious combination of many colors and interesting shapes, when it looks like a giant mosaic of vivid sparkles.

Co Thach has many beautiful beaches such as the main beach located near Co Thach Pagoda and Tien Beach, but visitors often prefer to visit the seven-color rock beach to bathe because the sea is cleaner here, it is more interesting to go to the sea to look at rocks and take pictures. 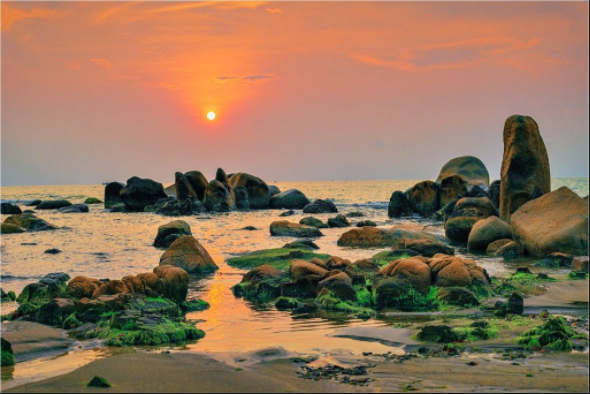 Under the sun and foam, a whole sea like a huge mosaic of vivid sparkles.

Sea waves, wind, rocks and unspoiled scenery of Co Thach are one of the many reasons why this place becomes an attractive stop for those who love and want to enjoy peaceful, tranquil nature.

If you spend the night at Co Thach, you can order seafood squid with a sun, scallop, Binh Thuan fish at an affordable price. Also, want to eat delicious, cheap seafood, you should take it easy to go away, visit restaurants in Doi Duong area, about 4 km from Co Thach.